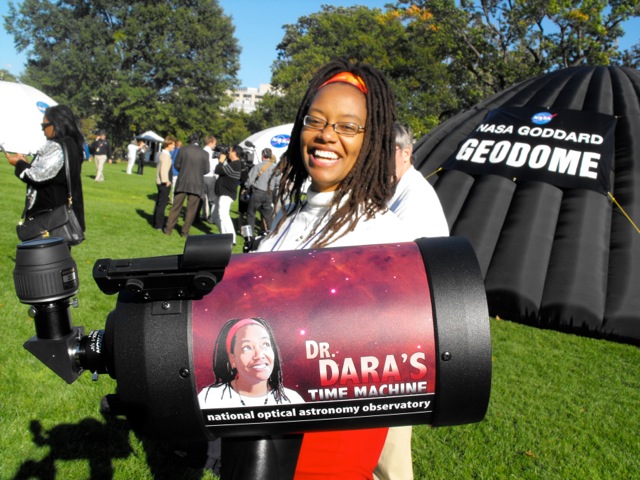 Norman is a research astronomer at the National Optical Astronomy Observatory (NOAO).

She says her “research is in the area of Active Galactic Nuclei. Active Galaxies are those whose central supermassive Black Hole is being fed by “infalling” gas.  This phenomena make the central region of the galaxy extremely bright.”

The NOAO is the US research & development center for ground-based night-time astronomy.

Norman is surprised that her career has been mostly as an observatory staff member and not a university professor, and she is glad for that split.

At her geekiest, the Associate Scientist can quote whole scenes from Monty Python, and Red Dwarf, a BBC sci-fi comedy series.

Norman earned her PhD and MS in Astronomy degrees from the University of Washington and her BS in Earth, Atmospheric and Planetary Science degree from the Massachusetts Institute of Technology.

Movie: Reservoir Dogs, Singing in the Rain, Eve’s Bayou, Cornbread, Earl and Me, The Ring, The Sixth Sense, Seven, and the original Bedazzled with Peter Cook and Dudley Moore.

She says, “recently I have been listening to older songs from Fishbone, like Unyielding Conditioning, Servitude, Ghetto Soundwave, and Change, which are especially relevant even today.”

Web site: The recent series on the blog: Astronomy in Color

Dream job? “Science advisor to a US President, who is serious about the importance of science and diversity in the scientific workforce!” 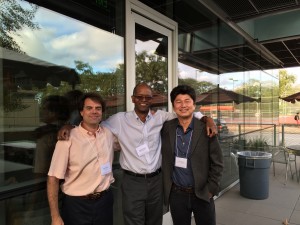 Professor Evans teaches class and conducts research on colliding galaxies with his graduate students and global collaborators, at the Department of Astronomy, University of Virginia.

Since 2009, the astronomer has hosted a total of six Howard University astronomy students for summer research.

Evans is the first staff member ever to be hired to work at both the UVA Astronomy Department and the National Radio Astronomy Observatory. The NRAO “operates a complementary, state-of-the-art suite of four radio telescope facilities for use by the scientific community.”

Evans says that the most surprising non-geek thing about him is that “I enjoy washing the dishes in the evening. It’s a good time to reflect on the day.”

For more on Aaron: go here.

Apps: For leisure, Overcast (which he uses to listen to podcasts), Dark Sky (for weather), Netflix, Hulu.

Book: The Cosmic Code: Quantum Physics as the Language of Nature by Heinz Pagels. “This book, and Carl Sagan’s Cosmos series were very influential in terms of shaping my interests in science at a young age,” Evans says.

Podcasts: The Talk Show and Critical Path, which are both technology-related.

Movies: The Matrix, The Incredibles.

Musical artist/group/song of the moment: Philip Glass’s Symphony No. 9.

Elisa Quintana’s planetary research won her a Scientist of the Year award.

Quintana’s NASA biography says that she “works on the Kepler Mission to help search for and characterize extra solar planets.”

Her office is in the NASA Ames Research Center, in Moffett Federal Field, in Silicon Valley, where she conducts research and development in aeronautics, exploration technology and science.

Quintana was the winner of the 2015 Scientist of the Year at the 2015 Hispanic Engineer National Achievement Awards Conference. She previously led an astronomer team that confirmed Kepler-186f as “the first Earth-sized planet found to orbit within the habitable zone of another star.”

She is a member of Society of Hispanic Professional Engineers.

Annette Lee has a galaxy of celestial ideas and interests

Lee says, “I am an astronomer, an artist…a woman of color. I teach, do research, design & deliver community events, and have a continuing flood of ideas.”

As a child, she was always told to pick one or the other – art or science. “It surprised me that I could do both…that the world really was big enough for someone who has two seemingly opposite passions. I am happy that I was stubborn and kept both fires burning.”

What is the geekiest thing about the Associate Professor of Astronomy & Physics at the Saint Cloud State University Planetarium? She says, “I love math and love finding patterns in the chaos.”

Lee who is Dakota-Sioux and Chinese from her Dad’s side, and French, Irish and Native American, says that the non-geekiest thing about her is “I love riding fast on horseback over long distances.”

Lee, director of the university’s Native Skywatchers, is also a painter. The medium, she says, melds her and other Native Americans’ view and reading of the cosmos with art and science that “breaks new ground in indigenous STEM.”

Musical artist/group/song of the moment: Passenger, “Bloodstains” on the album- Flight of the Crow.

Dream job? “To make (Celestial) Art, Do Science (work on the Kepler Space Telescope science team), and Organize Meaningful, Relevant, Community Events about our human connection to the cosmos and our place in it all.”

Franklin J. Dollar is surprised to be where he is today. No One Else Is.

Dollar, an Assistant Professor of Physics and Astronomy in the School of Physical Sciences at University of California, Irvine uses some of the most powerful lasers developed. He says they enable him to research how intense light interacts with matter to form the fourth state of matter: plasma.

Dollar is a member of the Dry Creek Rancheria of Pomo Indians and says, that “by understanding and controlling these extreme and complicated interactions, compact sources of x-rays and particle beams are possible.”

What surprised Dollar about his career path? “Is that it was possible to make it to where I am! I had always thought of these professors as being so much smarter and all knowing that it seemed like an impossibility as a freshman that I could one day be one,” he says.

Apps: “These show how much portable power we have:” Shazam, Star Walk, a star gazing guide, Room Scan Pro which draws floor plans all by itself, and Garage Band.

Book, graphic novel, online anime or web series: XKCD “about Romance, Sarcasm, Math, and Language is one of the nerdiest webcomics around,.”

Musical artists of the moment: SupaMan, a member of the Crow Nation and a Montana hip-hop star, has had a great year, as well as Kawehi. Follow: Supaman, and watch Kawehi cover Ramble On by Led Zeppelin.

Web site: Wikipedia, Google scholar, WolframAlpha, a Computational Knowledge Engine, and StackExchange, a Q and A site with a difference.

Jane X. Luu shared a major prize in Astrophysics in 2012.

Luu says she tries to understand the origin of small solar system objects like comets, asteroids, and Kuiper Belt objects. The Kuiper Belt is “a vast population of small bodies orbiting the sun beyond Neptune.”

As an astronomer at the MIT Lincoln Laboratory, she also tinkers with “new types of light detectors to see what new scientific problems they allow me to solve.”

The MIT Lincoln Lab is a federally funded research and development center in Arlington, VA, that applies advanced technology to problems of national security.

In 2012, Luu, who was born in Vietnam, shared the Norwegian Academy of Science Kavli Prize in Astrophysics. It was awarded “for discovering and characterizing the Kuiper Belt and its largest members, work that led to a major advance in the understanding of the history of our planetary system.” The Kuiper Belt lies beyond Neptune’s orbit and may have many asteroids, comets, and other small bodies made of ice.

Luu earned her PhD in Planetary Astronomy and Science degree at the Massachusetts Institute of Technology, and her BS in Physics degree at Stanford University.

Books: Julie of the Wolves by Jean Craighead George or To Kill a Mockingbird by Harper Lee.”

Movies: Blade Runner, The Apartment, and some Hitchcock movies.

Musical artist/group of the moment: Walter Martin, formerly of the indie band, The Walkmen.

Dream job: “Professor at a small university, preferably the same institution as my colleague Dave Jewitt, where I can do both research in astronomy AND build cool new instruments.”

Laura Lopez has been awarded three fellowships in her field.

Lopez’s focus is on the birth and death of massive stars and how these processes affect the surrounding interstellar medium.

The Assistant Professor in the Department of Astronomy, at The Ohio State University studies star-forming regions and supernova explosions in the Milky Way as well as adjacent galaxies via data across the electromagnetic spectrum.

Previously, Lopez was a Postdoctoral Hubble Fellow at the Harvard-Smithsonian Center for Astrophysics and an Einstein Fellow and Pappalardo Fellow in Physics at MIT.

Lopez has been a member of the Committee on the Status of Minorities in Astronomy of the American Astronomical Society (AAS). She is also a 2016 recipient of the Annie Jump Cannon Award in Astronomy. It is awarded annually for outstanding research and promise for future research by a postdoctoral woman researcher.

Postdoctoral Hubble Fellowship at the Harvard-Smithsonian Center for Astrophysics.

Committee on the Status of Minorities in Astronomy