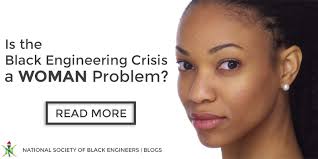 This commentary has three authors. They are Karl W. Reid, Erika Jefferson, and Valerie Thomas. This article was edited by, not written by Frank McCoy.

Karl W. Reid is Executive Director of the National Society of Black Engineers (NSBE). He has BS and MS degrees in Materials Science and Engineering from MIT, and an EdD from the Harvard University Graduate School of Education.

Erika Jefferson, Founder, Black Women in Science and Engineering, is a project manager at DRF Industries, an educational consulting firm, and an Operations Excellence Manager at a Houston oil and gas company. She has an MBA from Georgia Tech, and a dual BS in Chemical Engineering degree from Louisiana Tech University and Southern University and A&M College at Baton Rouge.

Valerie Thomas is the Director, Women in Science and Engineering, Special Interest Group at the National Society of Black Engineers.

[The commentary has been edited for space and clarity.]

In 2007, Dr. Shirley Ann Jackson, the first black woman to earn a Ph.D. from the Massachusetts Institute of Technology and now the president of Rensselaer Polytechnic Institute (RPI), coined the phrase “the quiet crisis” to describe the growing gap between the nation’s demand for engineers and scientists and the inadequate pool of skilled talent to meet the demand. She argued that our nation’s failure to provide students from all backgrounds with an adequate education in science, technology, engineering and math (STEM) explains why we’re not keeping up with the growing demand for technical talent. Given that Dr. Jackson’s concerns were raised nine years ago — at the dawn of both the mobile and social media revolutions, to name a few — the quiet crisis is no longer quiet!

It is known that the percentage of engineering degrees awarded to African Americans in the U.S. is on the decline, from 5.4 percent of all engineering degrees awarded in 2003 to 3.5 percent in 2014, according to the American Society for Engineering Education (ASEE). This retrenchment is why the National Society of Black Engineers announced its strategic plan goal to nearly triple the number of black engineers this country produces annually, from 3,500 in 2012 to 10,000 by 2025.

Many NSBE members and other stakeholders ask the obvious question: How do we get to 10,000? Besides our published plans to expand and scale-up our programs and partnerships in all segments of the educational pipeline, one recent study suggests another clear path to 10K.

A recent book edited by John Slaughter, Yu Tao and Willie Pearson Jr., “Changing the Face of Engineering: The African American Experience,” suggests that the engineering crisis among blacks in America is a black woman crisis. In other words, the percentage of African Americans is declining in engineering largely because fewer African-American women are earning degrees in the field.

The Other Quiet Crisis

In one chapter of the book, Shirley Malcom and Lindsey Malcom-Piqueux paint a sobering picture. Black women have a two-to-one advantage over black men in overall undergraduate enrollment and degrees awarded (problematic statistics in their own right).

But, black men enrolled in engineering programs outnumber women by three to one. “Since 1977,” they write, “the female advantage that black women experience in college enrollment and earned bachelor’s degrees does not translate to large numbers in the field of engineering.”

Monique Ross of Purdue University, in a recent study, summarizes it this way: although black women comprise 6.4 percent of the general population, they make up only 1.2 percent of undergraduate engineering enrollment and 0.77 percent of all engineering degrees awarded! It’s hard to become more underrepresented than this.

The researchers make it clear for NSBE that the path to 10,000 must proactively include black women.

Gender parity will double the number of black engineers this country produces and get us two-thirds of the way to our 2025 goal.

What Do We Do?

We need to be intentional about increasing black girls’ and black women’s interest in, awareness of, and self-efficacy with regard to engineering. Here are a few ways to collectively make this happen.

Change the conversation about engineering. The National Academy of Engineering’s has shifted its focus from hard, technical descriptions located in disciplinary silos such as “electrical engineering” to a contemporary reality where engineers solve cross-disciplinary problems that benefit people’s lives. This is a message that resonates with young people, and especially young women.

Increase interest. The National Science Foundation reports that only 3.2 percent of African-American freshmen women express interest in majoring in engineering, compared with 14.6 percent of black males.

Reverse the trend by:

Those organizations provide women with virtual and personal networking opportunities offering brilliant role models to develop generations of engineers.
The path to 10,000 must engage more black women to pursue engineering.

To do that, change the conversation about engineering, create more awareness and access, and leverage existing networks to equip more black women to solve the 21st century’s increasingly complex problems using the technical training and innovative mindsets of engineers.