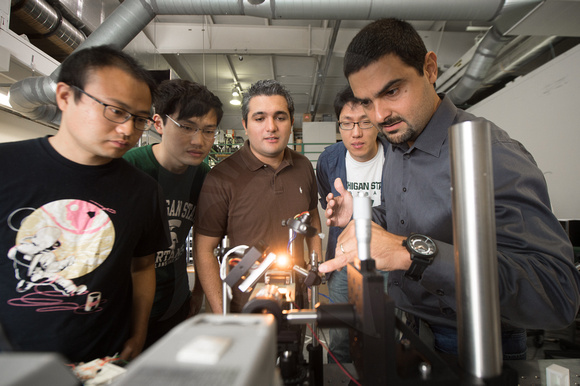 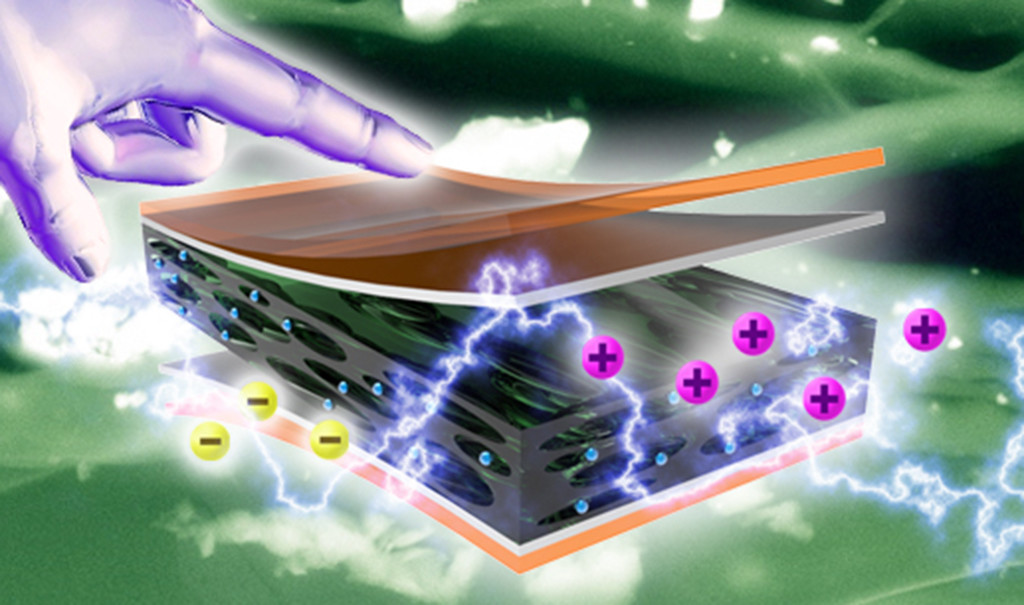 The ferroelectret nanogenerator (FENG) that increases its voltage every time it is folded. Credit: Michigan State University

Imagine harnessing energy from motions like walking, or tapping a keyboard, if it is equipped with an inexpensive device, whose power can be increased readily. This energy process is real.

The device’s developer is Nelson Sepúlveda, a Michigan State University (MSU) associate professor of electrical and computer engineering and the lead investigator of a recent project.

The energy-producing apparatus is a nanogenerator. That is something like a miniscule circuit board that can convert mechanical or thermal energy created by small physical changes or movements.

View the linked videos to see how an LCD touch screen, a bank of 20 LED lights and a flexible keyboard were operated not by using a battery but by touching or pressing a surface.

The results of the MSU team’s study, “Flexible and biocompatible polypropylene ferroelectret nanogenerator (FENG): On the path toward wearable devices powered by human motion”, were published in the journal Nano Energy.

Sepúlveda says that the discovery means that human powered wearable devices allow people, for instance, could charge their cell phone for a week, “because that energy will be produced by your movement.”

The FENG was created by developing a silicon wafer which has ultra-thin layers of substances such as silver, polyimide and polypropylene ferroelectret. The ions are added so each of the device’s layers has charged particles. In a fashion similar to other piezoelectrics, the device generates a voltage when it is squeezed or pressed in this case by a human action. Piezoelectricity means electricity that is created resulting from pressure.

Corporations, entrepreneurs, and consumers could love that the FENG, as thin as a paper sheet, is very flexible, can be any size, and used in many ways. Sepúlveda’s team lit the LED lights with a palm-sized tool, and powered the touch screen with a device the size of a finger.

Sepúlveda says an additional FENG feature is that, “Each time you fold it you are increasing exponentially the amount of voltage you are creating.” The researchers are already working on a procedure that shows how a FENG in a shoe may power a wireless headset, and of greater consequence trying to figure out how to develop this tiny generation of high voltage into a current.

He earned his MS and PhD degrees in Electrical and Computer Engineering at Michigan State University.

His doctoral students and team members in the study were Wei Li, David Torres and Tongyu Wang, and Chuan Wang, and assistant professor of electrical and computer engineering.

Sepúlveda, who has presented a paper at a Society of Hispanic Professional Engineers convention,  has also attracted and has mentored a steady stream of Hispanic PhD candidates in Electrical and Computer Engineering.