Welcome to StemRules.com, your platform for STEM business, career, education news and information.
Look around and let us know what you think.We will be tweaking the site.
Page 8 of 9 Prev Next

Anima Patil-Sabale is on a mission to be a rocket woman. 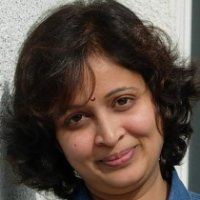 Patil-Sabale is a Software and Aerospace Engineer, working in the Intelligence Systems Division, on integration projects, at the NASA Ames Research Center.

She is also “pursuing my childhood dream even at this stage in life. I never got to pursue it growing up in India. Plus, it’s never too late, “ she told STEMRules.

Previously, she was Senior Principal Software Engineer on NASA’s Kepler Mission to survey a portion of our region of the Milky Way galaxy.

Patil-Sabale has an MS in Aerospace Engineering from San Jose State University, a Master of Computer Applications degree and a BS in Physics degree fromNorth Maharashtra University, India.

What’s the geekiest thing about her?  She says it is continuing to want to learn new things or studying at age 40. That is important habit, because astronaut must keep updating their skill sets and adding new ones.

On the non-geeky side, Patil-Sabale is an artist and a performer, who has sung and choreographed dances since she was in school.

Books: The Martian by Andy Weir, Shreeman Yogi by Ranjit Desai, Pride and Prejudice, and anything on space adventures :).

Social pages: My Astronaut Aspirations by Anima Patil-Sabale, her Facebook page, and her Linkedin.

Movies: The Martian, Interstellar, Star Trek, and, even, the Star War saga! I like any good, adventure (gore-free) space movie.

Music: I am a music lover and an amateur singer, so I like any soulful music. I love oldies and some new Bollywood. Unchained Melody by The Righteous Brothers, and Nothing’s Gonna Change my Love For You have been my favorites. She says her 13-year-old introduced recently her to music website, 99.7 FM.

Podcast: My interview in my mother tongue, Marathi.