Did You Know That What’s In Your Gut May Affect How You See?

Researchers at the University of Montreal (UM) have reported that, “Bacteria in your intestines may play an important role in determining if you will develop blinding wet Age-related Macular Degeneration (AMD).”

[Watch What is Macular Degeneration?]

Specifically, the scientists said that “diets rich in fat alter the gut microbiome in a way that aggravates wet AMD, a vascular disease of the aging eye.”

To counteract developing AMD or to slow its progression, researchers suggest altering one’s diet or employing other means to battle “this blinding disease.”

Although wet AMD accounts for only 10 percent of AMD cases, it is the primary form leading to blindness. AMD afflicts more than 10 million people in North America and is the leading cause of irreversible blindness in the industrialized world.

The report that shows how gut microbiota influences pathological angiogenesis in obesity‐driven choroidal neovascularization was published in EMBO Molecular Medicine.

Meet women involved in retinal research at the UMontreal

Mawambo works in the Maisonneuve‐Rosemont Hospital Research Centre at the University of Montreal, and is originally from Doula, the capital of Cameroon, a country in West Africa. She is a recipient of a 2014-2015 Vision network publication award, and in 2014, was the co-first author of a study about retinal neovascular diseases. 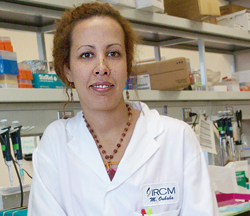 Oubaha, who has a PHD in Molecular Biology, works in the Institut de recherches cliniques de Montréal. In 2014, she was awarded a $35,000 postdoctoral fellowship from The Hôpital Maisonneuve-Rosemont (HMR) Research Centre, in Montreal.

HMR is the facility where the AMD research mentioned above was conducted. Oubaha, and Mawambo, have both worked under the supervision of the University of Montreal’s Dr. Mike Sapieha.