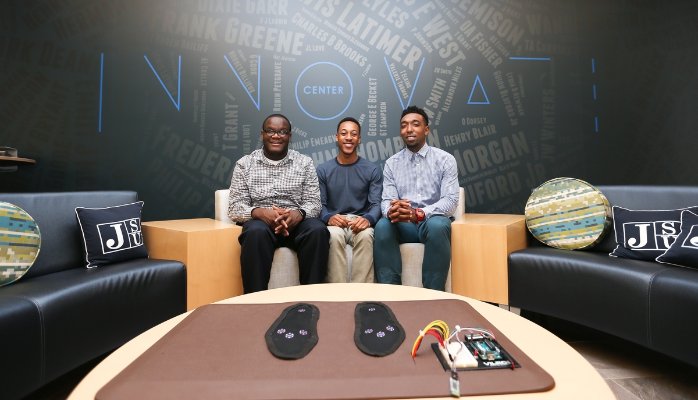 They Created a “Smart Mat” to Help Prevent Amputations. 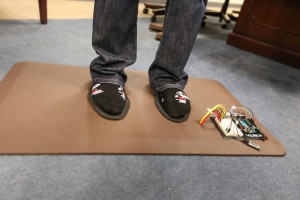 (Photo by Charles A. Smith/JSU)

STEMRules.com followed up on a recent WJTV12 report about an ingenious team of now former students of historically-black Jackson State University that turned a senior class project into an invention that may save diabetics limbs and perhaps lives.

In the top photo, from left are Chevan Baker, Jordan Barber, and Jann Butler .

The former JSU College of Science, Engineering and Technology (CSET) students developed a waterproof smart mat to measure the temperature on soles of the feet of diabetics.

That knowledge can help diabetics to avoid foot ulcers that can lead to foot or leg amputation. The quartet has applied for a provisional application patent.

The Jackson State University CSET is one of 14 fully-accredited HBCU engineering schools. All were members of the National Society of Black Engineers.

Chevan Baker and Fred Harris will receive their BS degrees in December 2016.

Jann Butler received his BS degree in Computer Engineering from Jackson State University. He is currently an MS in Computer Engineering graduate student at JSU. Since 2015, he has been a Relay Support Intern with Entergy, an integrated energy company engaged primarily in electric power production and retail distribution operations.

Jordan Barber has a BS in Computer Engineering from JSU, and works currently for Mississippi IT.

Each team member has close friends or family members that have been affected by diabetes. Mississippi is ranked second in the nation for prevalence of diabetes with four of every 1,000 deaths resulted from complications of the disease.

“The mat is important because it takes the temperature, but also our app because it allows them to communicate the information with their doctor, “ said Barber.

Some of the Tech Behind the Smart Mat

Each senior project takes two semesters to complete. Senior Design I is the theoretical phase; Senior Design II is the implementation phase.They used use Arduino Uno in the development of the project, and C++ based coding for language purposes.

Dr. Gordon Skelton, professor in JSU’s Department of Electrical and Computer Engineering and director of the graduate program for CDS&E (Computational Data-Enabled Sciences and Engineering), said “This was an excellent group of students who showed great promise for their engineering careers. They will make themselves and Jackson State University proud.”